Construction of the railway line from Nyora to the Powlett River Coal Fields, Wonthaggi 1909 – 1910:

When the State Coal Mine (SCM) commenced operations at the Powlett River Coalfields in 1909, coal was transported by bullock wagons to Inverloch then shipped to Melbourne. In late 1909 the Victorian Parliament authorized the Railways Department to extend the recently commenced Nyora – Woolamai railway line through to the Wonthaggi coalfields; trains could then be used to transport coal to Melbourne.

Approximately 300 men were employed, 140 horses and 17 bullock teams worked on the construction.  The temporary extension line was completed in 10 weeks, finishing at the SCM workings in South Dudley. The first goods train arrived on the coalfields on 22nd February 1910. The first passengers were carried to Wonthaggi on 9th May 1910.

The permanent line, including the construction of the Kilcunda trestle bridge and a permanent bridge over the Powlett River at Dalyston, was completed on 10th April 1911. The Queen Ann style brick railway station building, Murray Street Wonthaggi, was completed in 1912.

Wonthaggi & District Historical Society has a permanent display of photographs that document the story of the construction of the Nyora to Wonthaggi railway line. 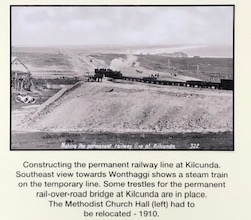 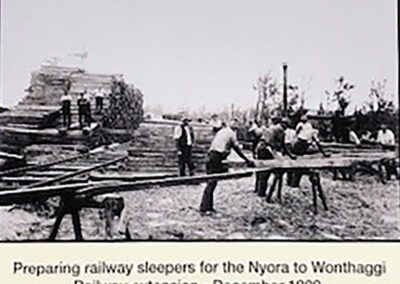 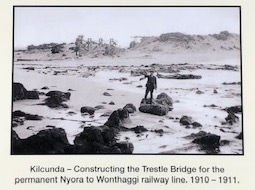